Streets Alive is an annual outdoor art event in downtown Orillia open to the public all summer long. It draws locals, cottagers and tourists to Orillia’s downtown streets to boost the local economy and instill a sense of civic pride.
Streets Alive! started in 2009 as an offshoot of the successful Orillia Festival of Banners. This first Streets Alive! event featured jury-selected artists transforming large-scale vinyl banners with their art live on the street. The Peter Street art block was buzzing with music, performance art and hands-on activity.
The appeal of the event was particularly evident on the second day, as over 400 people lined up in the rain to vote for their favourite banners. The top four artists earned substantial People’s Choice cash prizes, and their banners joined the Festival of Banners collection for prominent display in Orillia.
The project has grown each year, with more and more artists vying to get involved and word of our incredible artistic endeavours spreading farther afield. 2010 featured giant guitars. The next year brought wrought-iron sailboats with Lexan sails as the artists’ canvas. 2012 celebrated Stephen Leacock, with sculptures modelled on his reading chair at his Orillia summer home. 2013 was a love letter to art; templates spanned the alphabet, with artists taking giant steel letters and making them their own. Artists transformed metal planter sculptures to showcase the theme of Art Grows Here for the 2014 project. In 2015 artists truly opened the door to creativity, creating beautiful works of art from, you guessed it — doors. In 2016 the pieces were story poles that the artists created from scratch, and in 2017, for Canada’s 150 celebrations, the theme was Maple Masterpieces. In 2018, to mark the 10th anniversary of the birth of Orillia Streets Alive, Ms Leslie Fournier (founder and co-ordinator) organized a retrospective of 40 pieces from past years. 2019 brought an ode to alternative transportation, with the ‘Pedal Powered’ project. 20 bike sculptures graced the sidewalks, dozens of bicycles were displayed in shop windows, and bicycle wheels were installed on street posts. Unfortunately, Streets Alive 2020 Hippie Vans (a nod to the 60th anniversary of the Mariposa Folk Festival) was cancelled due to COVID-19. However, planning has begun for a 2021 version 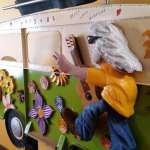 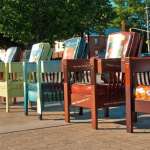 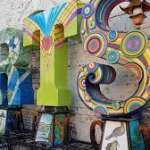